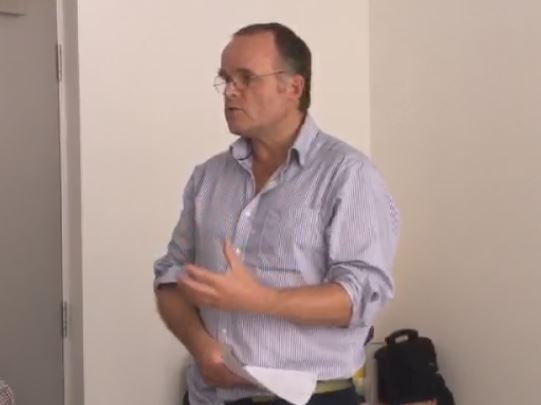 For our final meeting of 2016 on Mon 5 December, we are delighted to have Green MSP, Andy Wightman, to speak on the extremely topical subjects of Land, Democracy and the Economy. A few days ago on Wed 30 Nov 2016 in the Scottish Parliament, Andy proposed the following motion on local democracy (with splendidly plain wording)

The Final Report from the Commission on strengthening local democracy was published in August 2014 and can be downloaded from their website. At the time it was widely endorsed by political parties including the SNP and the Conservatives. However both these parties put forward “wrecking” amendments to Andy’s motion on Wednesday.

First the SNP Minister for Local Government and Housing Kevin Stewart’s amendment resulted in a tie 61-61, with the presiding officer then casting his vote in favour of the original motion.

The Conservative MSP Graham Simpson then put forward the following rewriting of Andy’s motion, which won the support of Conservatives and the SNP and was therefore carried by 92 votes to 31.

The amended motion was subsequently carried by 96 votes to 27, with 4 Liberal Democrat MSPs (Willie Rennie was absent) voting for the amended motion, despite voting against the amendment. The Official Report shows that SNP MSPs, Gil Paterson and David Torrance, did not cast any votes on the Local Democracy amendments or motion.

Unbelievable. SNP & Tories endorsed @LocalCommission report in 2014. Today they vote together to kill my motion endorsing the same report.

Thank you to the 3 SNP MSPs who told me today that they didn’t agree with how they were told to vote yesterday in local democracy debate.

You can hear Andy Wightman speak on Land, Democracy and the Economy at 7.30pm on Mon 5 December 2016 in the Clermiston Inn (upstairs), Rannoch Road, Edinburgh, EH4 7EG. RSVP on Facebook.